Men with Breasts (Or Why are Michelangelo’s Women so Muscular?) Part 1 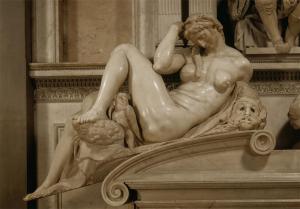 When I give a talk, or run a class that includes work by Michelangelo, generally at some point someone will suggest that Michelangelo’s female figures look like “men with breasts”. I have to admit, that I sometimes deliberately task students with describing a picture of Michelangelo’s Night (right) just so I can elicit this reaction – it’s a really useful starting point for discussing ideas about what we expect men and women’s bodies to look like, whether renaissance art is naturalistic, differing ideals of beauty and so on. Because this has happened so frequently, my title for yesterday’s masterclass at Glasgow uni was “Men With Breasts: Michelangelo’s Female Nudes and the Historical Context for Body Image”.

An explanation that people often given for the Michelangelo men-with-breasts phenomenon – which we should properly call the aesthetic of androgyny – is that they couldn’t get female nude models in the Renaissance, so artists just juxtaposed the head and breasts of women on men’s bodies. Because of stringent controls over female modesty, the idea goes, it was inappropriate for women to get undressed in front of men. In fact, this is the explanation given in Gill Saunders 1989 book, The Nude: A New Perspective– “female nudes in the painting and sculpture of the [renaissance] period were derived from male models … so they appear unconvincing”.

Now, this is both right and wrong. It’s true of course that for many women, especially women from the upper classes, there was strict control over their dress and comportment in the Renaissance. It’s also true that many of the female figures in renaissance paintings were based on male models – this is common practice, and goes well beyond Michelangelo. There were more men available around a painter’s workshop after all. What’s not true is that it necessarily made for unconvincing women – Raphael’s St Catherine of Alexandria was based on a male model, and I don’t see her as particularly androgynous.

There was also, however, women in this period who would take their clothes off in return for payment or other favours; it’s probably best not to make assumptions about women’s lives in the past based solely on the evidence from a social elite. Although there’s not very many drawings after the female nude still in existence, there’s plenty of evidence for renaissance artists having naked women models, especially after 1500 – there’ll be more about this in a chapter of my nudes book. As a matter of fact, one of the handful of extant renaissance drawings after the female nude is by Michelangelo (to the left, now in the Louvre). This image of a naked kneeling woman, her hair plaited around her head, is a study for Mary Magdalen in his unfinished Entombment panel, which was painted around 1500 for the church of Sant’Agostino in Rome (therein lies a tale about courtesan culture in Rome, but I’ll save that for another post).

If Michelangelo, then, knew what women’s bodies looked like, and was clearly able to draw them (being quite handy at drawing), we have to assume that the appearance of his women was through deliberate choice rather than ignorance. I’ll return to what these choices may have been in the next post – I’m off to the library now to start reading the new edition of The Image of the Black in Western Art.

For more on this, see Men with Breasts 2….

I'm Professor of Renaissance Visual and Material Cultures, in the School of History of Art at the University of Edinburgh. I'm currently writing a book called How to Be A Renaissance Woman, about make up, body care and hygiene in the sixteenth century. My last book, on the Italian Renaissance Nude (Yale University Press) was out in 2018, and I was also involved in the exhibition on The Renaissance Nude at the J. Paul Getty Museum in Los Angeles and the Royal Academy in London 2018-19. I have a research blog for putting out ideas and research more quickly than traditional publishing allows, and also to include thoughts, material and info that won't fit in an article or book.
View all posts by jillburke →
This entry was posted in Renaissance nudes and tagged Gender, Life drawing, Michelangelo, Nudes, Renaissance. Bookmark the permalink.

50 Responses to Men with Breasts (Or Why are Michelangelo’s Women so Muscular?) Part 1