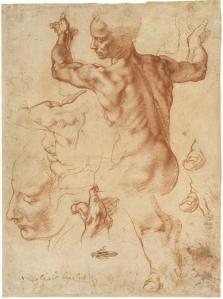 So in the first part of this post, I’ve argued that Michelangelo’s women had access to female models, and that his use of male models for female figures wasn’t unusual. The other thing that is often mentioned in class is that Michelangelo was gay and thus somehow had an inbuilt distaste, or even inability, to portray women’s bodies accurately. Now, without getting too closely into the fluidity of sexual identities in the Renaissance/early modern period (if you’re interested, a great starting point is the essays in Judith Brown and Robert Davis, Gender and Society in Renaissance Italy), I don’t think it’s possible in this period that a person’s sexuality can be taken as a straightforward explanation for his or her artistic choices. Moreover, it certainly doesn’t explain why this type of image should be popular with a broader audience.

There are two easier explanations:
1)  androgynous bodies were thought to be beautiful in the Renaissance,
2) artistic nudes weren’t meant to be realistic.

The boundaries between male and female were conceived differently in renaissance culture than they are today.  Thomas Laqueur has argued in relation to renaissance anatomical practice that at this time there was “only one canonical body and that body was male”. Although people have objected to what Laqueur has called the “one-sex model”, it seems to have been a highly influential way of understanding sexual difference in the renaissance. The idea was that the normative human body was male, and that women’s bodies were simply imperfect versions of men’s. For this reason, in  early anatomical books, the bodies used to demonstrate human physiology are always male unless the female reproductive system is specifically being studied

Women, after all, were related to Eve who was created from Adam’s rib. Leone Ebreo in his Dialogues of Love (written from the 1490s but first published in 1535) explains that when God created Adam, he was a complete human, containing both male and female parts; Eve was created from his rib whilst he was sleeping, as women represent the imperfect, passive and corporeal aspect of men – who are representative of the intellectual and spiritual tendencies of humans.

No wonder then, that for some in the renaissance, the most beautiful women were those who looked the most like that perfect original form. Like is attracted to like, Marsilio Ficino explained: “Women truly easily capture men, and even more those women who bear a masculine character. And even more easily, men catch men, as they are more like men than are women”. Ficino’s follower, Mario Equicola, claimed in 1525 that “the effeminate male and the manly female are graceful in almost every aspect”. This was shown to comic effect in Benvenuto Cellini’s Autobiography, where he tells a story of a dinner party where he brought his young and beautiful model, Diego, dressed up as a woman, and Diego was declared the most beautiful of all the ladies. There are plenty of images of feminine-looking young men in the Renaissance that show the interest in male androgyny too – many of Leonardo da Vinci’s male figures look feminine (hence the non-controversy about John the Evangelist “really” being Mary Magdalen that Dan Brown talked about in the Da Vinci code).

There are good reasons, therefore, beyond convenience, why renaissance artists might study a male model as the basis for their female figures. What we need to do when looking at this type of renaissance nude is to disassociate ourselves from expectations of naturalism and to recalibrate our understanding of what is beautiful.

I'm Professor of Renaissance Visual and Material Cultures, in the School of History of Art at the University of Edinburgh. I'm currently writing a book called How to Be A Renaissance Woman, about make up, body care and hygiene in the sixteenth century. My last book, on the Italian Renaissance Nude (Yale University Press) was out in 2018, and I was also involved in the exhibition on The Renaissance Nude at the J. Paul Getty Museum in Los Angeles and the Royal Academy in London 2018-19. I have a research blog for putting out ideas and research more quickly than traditional publishing allows, and also to include thoughts, material and info that won't fit in an article or book.
View all posts by jillburke →
This entry was posted in Uncategorized. Bookmark the permalink.